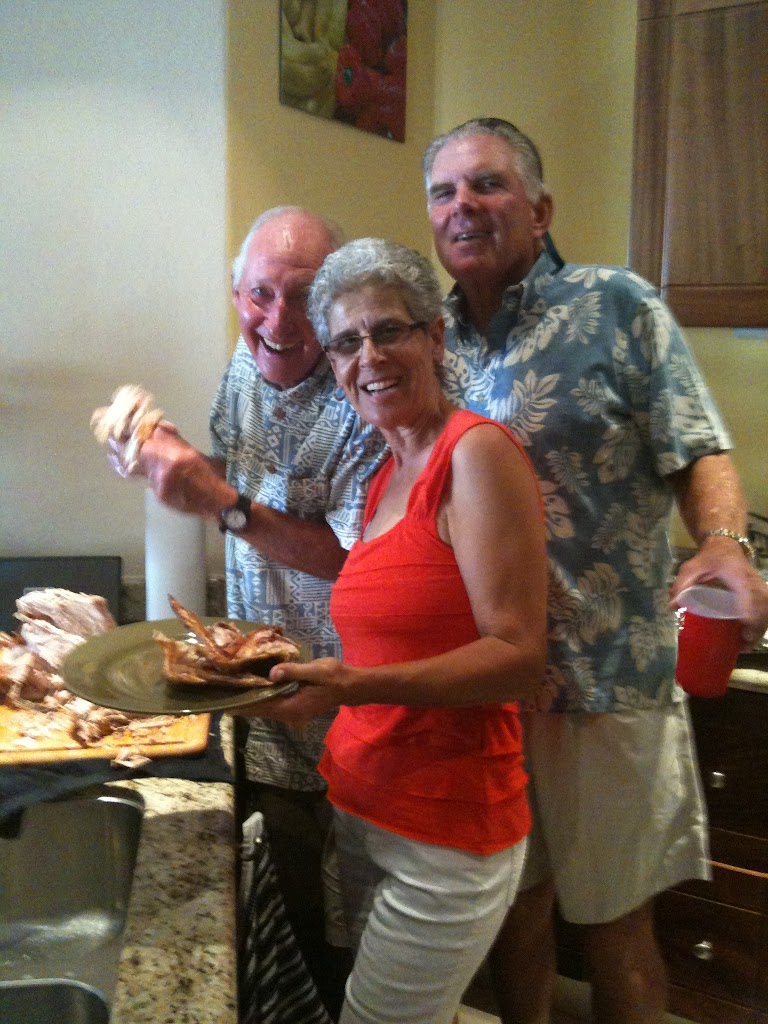 We did not have our family down for the holiday weekend but we did get to spend the afternoon with a wonderful group of cruising friends. Gily and John Foy hosted twenty cruisers to the most amazing turkey dinner. They did all the cooking and we brought wine and sailing stories. Rog was given the enviable job of testing both the BBQ turkey and the oven roasted one. He couldn't decide which one he liked better so Renee finally had to separate him from the platter! 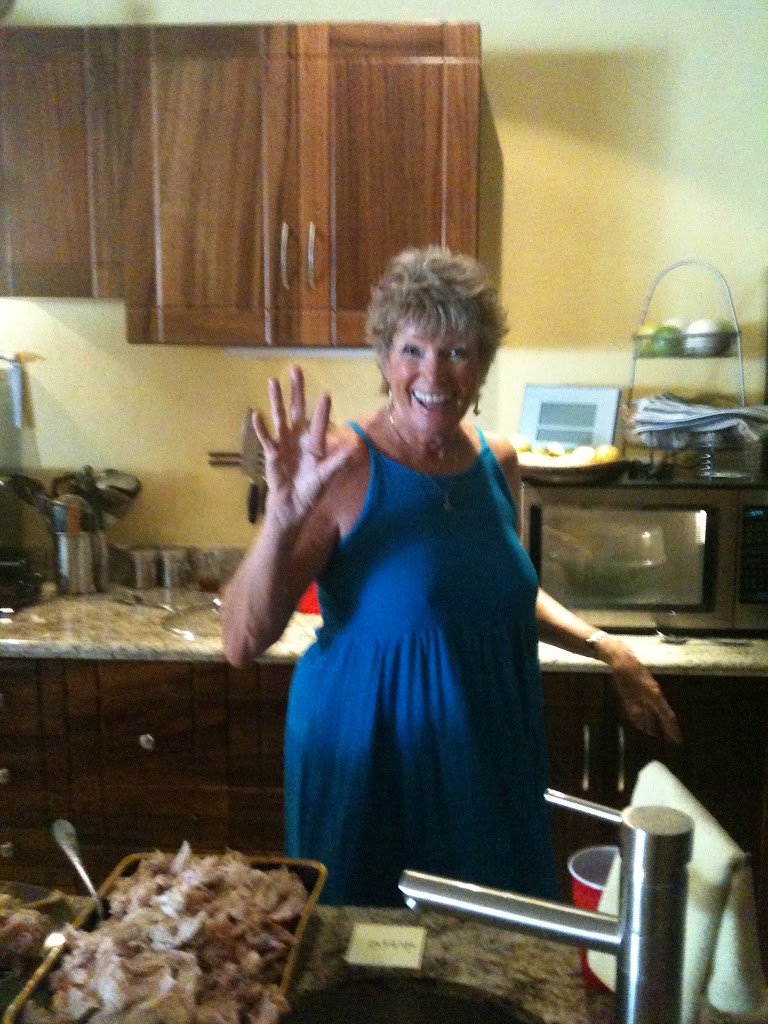 Gilly was still smiling after a very long day in the kitchen. Notice the heaping platter of turkey, we went through all that! 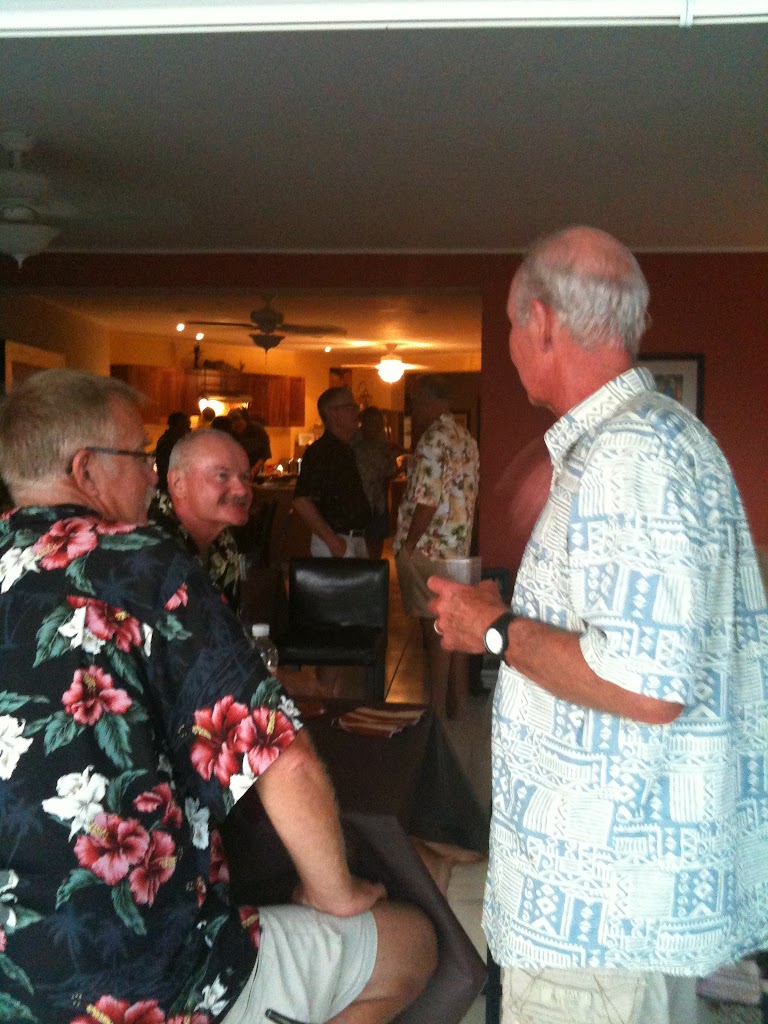 John was busy getting caught up with friends from the 2007 Ha Ha. We were one of the few friends that had not come down on that Ha Ha. Jake of the sailing vessel Jake has become my mentor for the single side band. 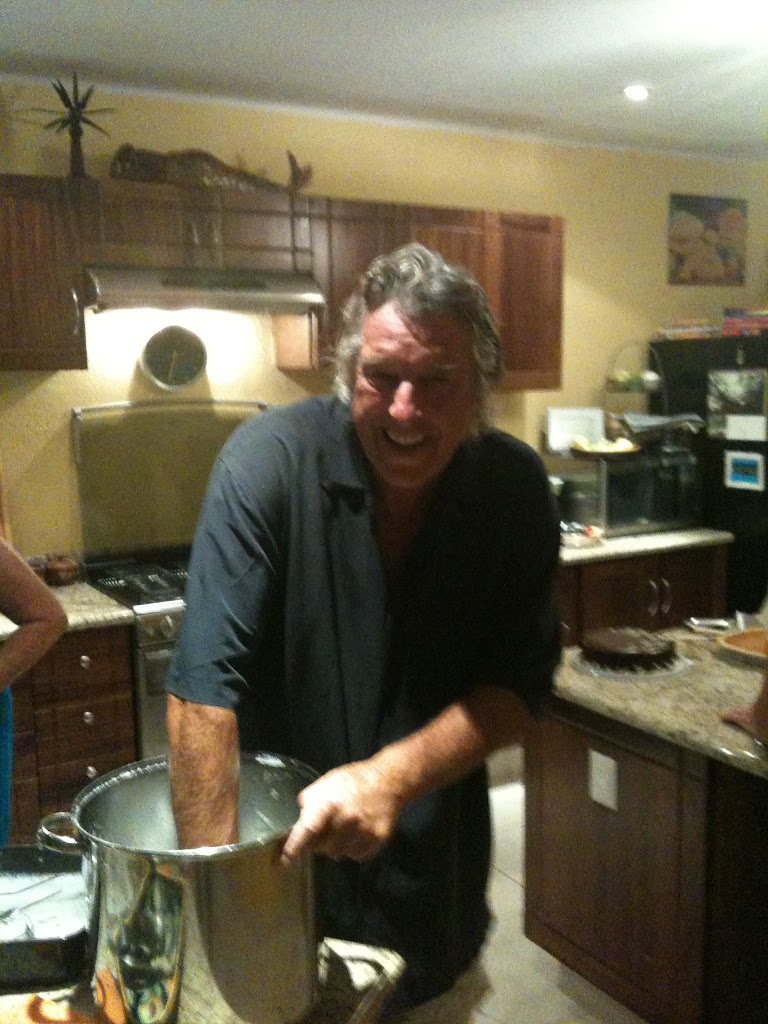 Richard had volunteered to do the dishes knowing full well that Gilly's dishwasher was on the fritz and he made good on his promise. He even did all the pots and pans. He can come to dinner on my boat any time he wants. 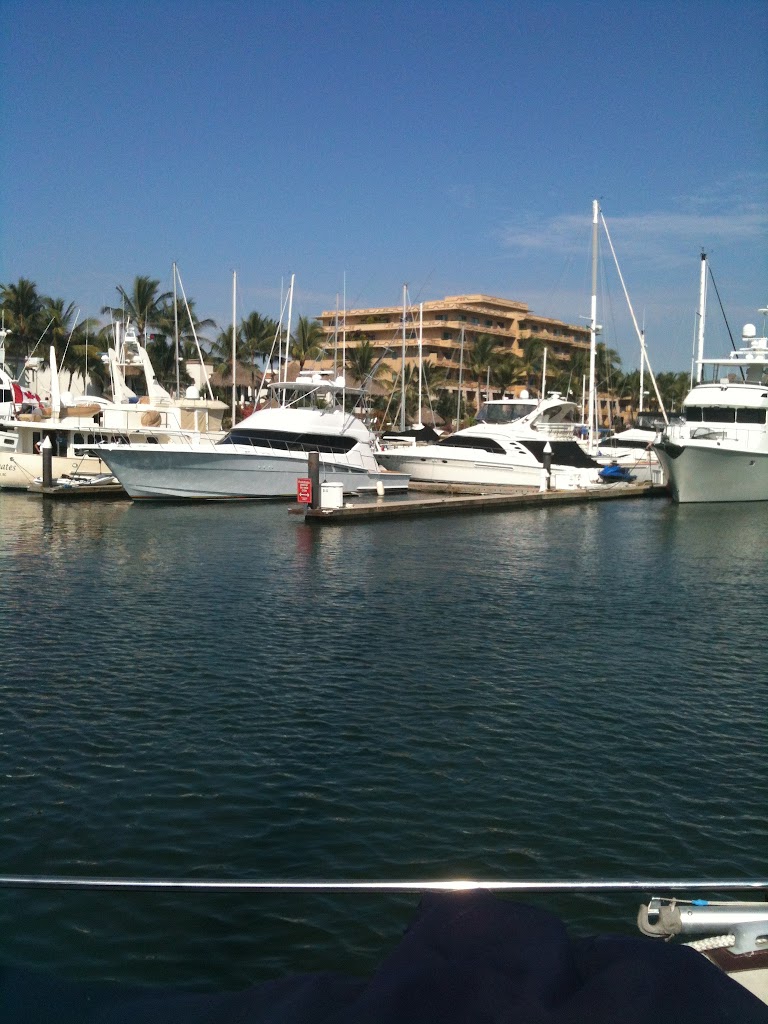 Saturday we finally got Di's Dream off the dock after three failed attempts. We had planned on sailing last weekend but Rog irritated his back to the extent that he was down for two complete days. Next attempt to go out was on Tuesday, however after a quick game of tennis, quick because he sprained his ankle big time, so that day we stayed tied to the docks. Finally on Saturday we took off for the short sail over to La Cruz. It is only 5 miles so it really was a short sail.

We did have one little hic up as we were trying to leave the dock, no bow thruster! Rog has grown to love that little toy and was really disappointed when he didn't hear that garbage disposal sound coming from the bow. Being a little creative he was able to use a wire to jump start the thruster. We were off. 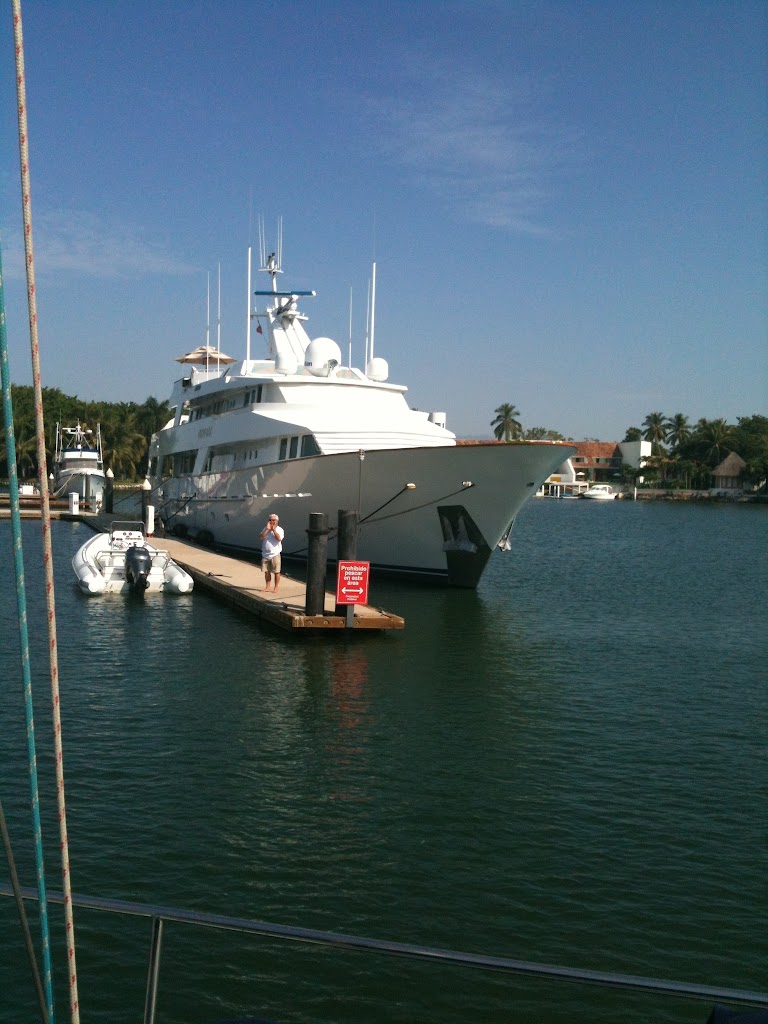 Our good friend Captain Rob out on the docks to give us a proper send off. Last year Rob had been on the beautiful 1956 90 ft Rhodes motor sailer Sea Diamond. After spending the summer in the Med as her captain he is now on the 165ft power boat Piano Bar. 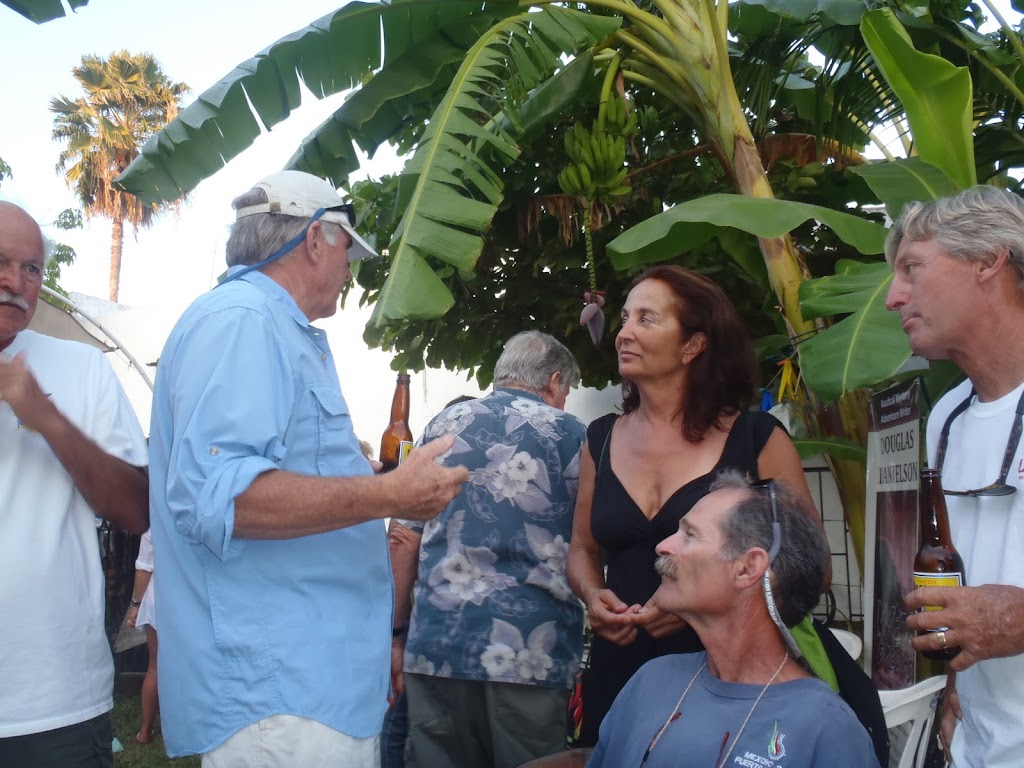 We finished Saturday with a party at Mike's North Sails Loft. It was a gathering to kick off the racing season here on Banderas Bay. Wednesday we will start the three day Banderas Bay Blast with a quick run over to La Cruz from Paradise Village. We hope to have a full crew of guys so that Di can spend that time shopping or at the spa with girlfriends. We will report how that turns out.

Sunday we spent the morning at the La Cruz Farmers Market however those pictures did not turn out so well. Just means we will have to go back this weekend so we can share all the wonderful crafts and delicious delicacies available for purchase.
Posted by Rog & Di Frizzelle at 7:53 PM No comments:

We arrived back at the boat on a Thursday afternoon and bright and early Friday, alright 10am is early for me, I made the trip into the Telcel store in downtown PV. Telcel is the Mexican version on AT&T and can change my US sims card in my Ipad into a Mexican card so that for a fee, $50.00 per month, I can have 3G coverage anywhere I go. It worked very well all last year so I had no qualms about singing up again this year even though there is a Starbucks within walking distance of the boat. I can only drink so many lattes.

All was working for two days, long enough for me to feel very comfortable. Suddenly on Sunday there was no connection until very late in the day and Monday there was nothing. Tuesday Rog and I drove into town for the first time to report our lack of connectivity to a lovely account manager that just smiled at us. I think that meant he did not understand a word we were saying. Soon there we other customers complaining about the lack of Internet so it was decided that the entire system was down for all Apple devices and Blackberries. Should be up soon!

In the meantime my iPhone is going haywire. It is shutting itself down and restarting itself every five minutes. Needless to say the battery was going dead in less than four hours. Did not think the two problems were related so I started researching new phones and how I could get one shipped to me down in Mexico. After two more days of frustration I was ready to just give up on the phone when I tried it one more time. That's right, it was now working perfectly! iPads are back online too so I am back in business.
Posted by Rog & Di Frizzelle at 6:20 PM No comments:


Thursday afternoon around 3pm we finally arrived back at the boat. The drive down from Nogales may be all the adventure we will need for this season but we are ready to start the 2011 cruising season.

Crossing the border in Nogales was very uneventful until we got on the city streets. We had to dodge potholes, avoid deep trenches, and try and merge three lanes of traffic into one. Our idea was to cross the border early to avoid a backup but failed to think about the morning rush hour in Mexico. And there were no traffic signs in English! So while Rog was doing everything possible to avoid running into anything I was busy looking for the turn off for Auto Importation and Visa location. I knew it was 21 kilometers down the road but our car does not record kilometers so Rog kept driving until we finally saw the necessary building.

Before you can import the car you have to have a travel visa just like the kind you get when you fly into Mexico. Filling out the form was not the problem, paying the fee became very time consuming. At our early hour in the morning there was only one teller accepting fees for the visa as well as the car import so you can guess how long we waited patiently to make sure we entered Mexico legally.

Once out of Nogalas the drive to Navojoa was was uneventful. The landscape changed by the mile with cactus becomming scrub brush and streams with no water flowing. We used the toll road and found little traffic to slow us down, however we did drive at the speed limit all the way. Getting a ticket was not the type of adventure we wanted.


In Mazatlan we stayed at El CID Marina and Hotel where we have brought the boat many times so we knew we would enjoy a good nights sleep. Again we left early in the morning and ran into commute traffic as well as a major detour. It was a nightmare trying to navigate back roads with everyone trying to edge in front of the other cars but we got through it thank goodness.

The roads in Mexico had been four lanes for the most part until we arrived in Tepic. We had heard from Garry Dobson that this last section of the trip was a bit difficult. He did not understate what we were about to experience! From Tepic to Bucerias we had two lanes of hair rising turns and breath taking views all the time trying to watch out for those daredevil drivers that think they can pass on curves or hills. We navigated the section successfully and arrived at Paradise Village without a hitch. Now it is time to unload the car!
Posted by Rog & Di Frizzelle at 8:50 PM No comments: